Not all my visitors to the lake house are of the human kind, but I must say, human or not, I enjoy and end up loving them all.

There was the Crazy fish story. and  C.C. the Crazy Cardinal

Update on C.C. – He has returned several times for a quick peek in the window. He seems better balanced and no longer suicidal.

My least favorite insect visited. One I have feared since I was a child. It brought the whole dang family too. Well, in this case it’s called a colony.

My visitors were honey bees, but any bee will send me running, flaying, and shrieking like a sissy girl into the house. (Please note: I’m usually a brave-like warrior woman, just saying!)

I had thousands of honey bees interrupt my magazine reading on the deck one afternoon. Such audacity! First came the intense sound. I raised my eyes to find the air-filled with black buzzing dots. The shadow was headed my way. The chair flipped over as I exited. My reading material and I luckily escaped into the cottage without a single sting.

From behind the sun room windows about two feet away, I safely observed the bees. They chose to make my bird bath their destination. As I watched, the hanging group grew larger in size as each bee clung to one another. The entire dark triangular shape seemed to sway, and pulse, almost as if it was a single breathing entity. I was fascinated! 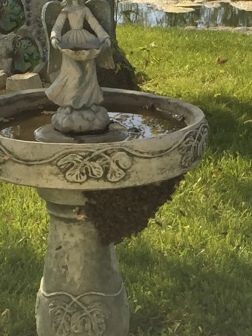 How would I get rid of them? I was alone on this trip. Thoughts of my husbands torch and Raid in the shed crossed my mind.

I had read somewhere recently that bees were dying off and needed to be protected. My next thought was, maybe there’s a nearby beekeeper who would be happy to come and rescue me. Oh, I mean rescue them. I found several keepers on the Internet.

“A bunch of bees landed in my front yard. Would you be interested in them?”

“Please don’t destroy them,” She quickly said. “The swarm will leave on their own in a few hours, as little as two, and a maximum of thirty. They are only resting.”

I insisted that they seemed settled and comfortable. She assured me that they will leave soon.”

The bee keeper was excited to hear about the new colony and repeated how fortunate I was to witness such an extraordinary event. Lucky me!

When a colony separates the queen can’t fly long distances, so when she tires and lands, all the bees surround and protect her. Once a swarm containing hundreds to thousands of bees are settled, the scout bees are sent out to locate a new permanent home for its queen and the young colony.

I recognized the chaotic buzz  while preparing a meal. I rushed to the window while the bees took their leave the same way they’d came. They dispersed layer by layer from the bird bath once again dotting the air and moving toward the west. Their visit lasted about twenty-two hours.

The swarm left before several of their scout bees had returned from their explorations.They appeared to be lost souls for a few days as they clung to my bird bath. I hope they found their new home.

The more I’ve learned about the complex life of honey bees, the more respect I have, and less fear.

If a honey bee stings you, it will die soon after. This isn’t true with other bees.

If you want to read more about honey bees, check out this site and article,  MAARC. I think all states should follow Maryland‘s laws.

My backyard boat building brother-in-law, Dave, is about to unveil his latest all wooden speedboat masterpiece. You wont want to miss this.